I’m sure sejak muda lagi you’ve heard the word democracy used in school and by adults, especially when it comes to national issues and politics. But sebenarnya democracy bukan just for adults: it’s a conversation we as youths should really be a part of too!

Wait, why should I care about Democracy in the first place? 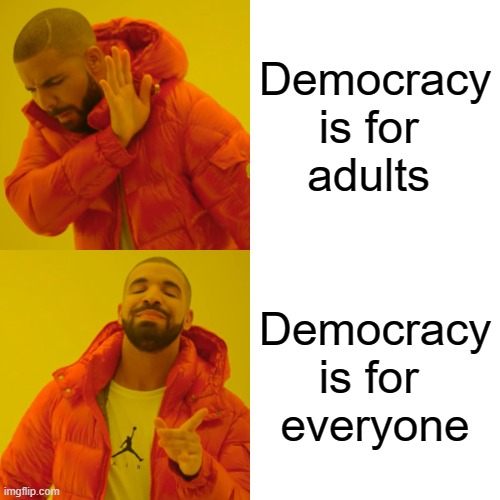 Okay but like why shouldn’t you tho? Democracy, beyond being the literal system of government we follow in Malaysia, is also related to social equality. It’s why free and fair elections and democracy berpisah tiada: elections give everyone equal opportunity to use their voting power to inspire meaningful change.

Practicing democracy leads to fairness on not just a national level, but also socially and personally. And as youths, we’re the future of this nation. It’s all on us fam! So lagi cepat we get involved and take an interest, the better we’ll be able to use democracy to create meaningful change to our country and its people. Because while democracy is just a political system, it’s the voice of the people that really makes democracy so powerful!

And to show you just how powerful your voice is, I talked with some friends from Dewan Muda Malaysia!

Dewan Muda Malaysia for the Win

I tak tau if y’all have heard of Dewan Muda Malaysia before, but it’s actually super cool! DMM is a 2-year leadership programme for youths that includes things like panels with policymakers and a simulated parliament. See, told you it was cool!!!

“Being a part of Dewan Muda Malaysia made me more aware of my rights and role as a Malaysian, and showed me the beauty of voicing your beliefs”, says Alyaah, a 19 y/o participant from Kedah.

As for Amira, another 19 y/o (but kali ni from Perak), DMM strengthened her belief that suara belia is crucial in the policy and decision-making process of the country. ”Politics affect everyone including youths. Young people should be given the platform to raise their concerns, to share their thoughts and to highlight their needs as they are also citizens of Malaysia.”

When I asked Vagish whether he thought Malaysian youths should get involved politically, the 20 y/o from Sabah said yes, absolutely! “The youths should not be discouraged by their age if they seek change. Sometimes, it might look tough for the elders to listen to our issues, but I firmly believe, overtime, they will see our issues as legitimate concerns.”

Pergh! If these responses don’t scream youth power, I don’t know what does!

READ: How to Talk to Your Racist Relatives about Racism

News flash: you don’t have to be a real politician to start making use of your democratic rights!

Platforms like DMM are a great way to learn more about democracy and policies, but you don’t have to participate in a programme to participate in a democracy. Thanks to recent movements, youths can now use their right to vote for the changes they want nationally. (Kudos jugak to the gomen for recognising our power and lowering the voting age from 21 to 18!)

And beyondddd that, ada je ways to practice democracy in your everyday life. 22-year-old Nur Farhanah from Johor says, “Democracy is not limited to general elections, constitutional conventions or a bunch of slogans. The essence of it is an everyday process of life”.

1. Learn to give & take.
When it comes to her relationships, Nur Farhanah practices democracy daily by forging a constant give-and-take, understanding one another’s s, and resolving differences in a way that goes beyond her own individual interests. This is something all of us can do easily! It’s basically taking a “semua benda boleh bincang” stance and being open to finding a middle ground that works for everyone.

2. Become a conscious consumer.
Chen, a 19 y/o KL-ite, exercises democracy daily with “dollar voting”. “By purchasing products and services from companies I deem ethical, sustainable, and , I am directly voting for the survival of the company”. Keep that in mind the next time you go to the shops: be mindful of the businesses you support as a consumer of goods! (Pro tip: remember to always #sapotlokal too!).

3. Listen. No, like, really listen!
Amirah said that she strongly believes that a country that fails to listen to the voices of young people is a country that its own future. And sis, I agree! If we don’t listen to one another, how can we expect others to listen to us? So next time someone shares an opinion, even one you disagree with, be sure to dengar baik-baik. It’ll help you both understand each other and come to an agreement – and that’s a way bigger win than being right!

Those are just three of the many things you can do to start living more democratically. Of course, now that the voting age has been lowered to 18, for you to get on the democracy wagon. Cam rugi jugak if we don’t use this opportunity to fight for a better future for our country.

And if you’re still under 18, takpe: if you can make a habit of being fair and kind to those around you, that is a great start too!

PSSST: Check out the Election Commission of Malaysia.

A 20-something fierce believer of children's rights!
Subscribe
Connect with
Connect with
0 Comments
Inline Feedbacks
View all comments

Sekadar Cita-Cita: Why Youth Unemployment Is A Problem

Inclusive play: a driver for change on #ZEROdiscrimination Day (and every other day!)

5 Life Lessons I Learnt from COVID-19